We too had something similar planned, but did not want to visit the same run of the mill spots.

We had planned a drive to Shivtharghal ourselves. It had been on our minds to visit this awesome place to experience the true rawness of the Sahyadri mountains and the dense forests that are said to be a characteristics of this place.

After spending a few weeks just toying around with the plan, we confirmed the trip; however we decided to take a hired car as friends advised that the ghat to reach there is a difficult one. I usually prefer my own car on family trips, however this time I agreed and it was in a way good. I was able to savor the scenery on the way and even click photos that I usually miss, since I am driving. 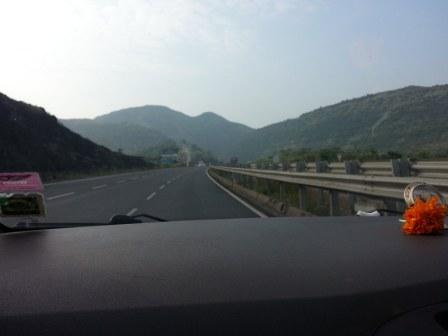 I had also read interesting things about this place – there is no network coverage and most mobile signals are lost among the high mountains around this cave. I had even read that the most sophisticated GPS trackers also lose their satellite connections, such is the geographical arrangement of this place. No wonder Ramdas Swami chose this place to write the holy scriptures of Dasbodh. He must have realized the geographical and cosmic significance of this place via his divine powers and chose to be completely disconnected from the outside world so as to concentrate on the task at hand. Such was his dedication and he teaches the same in the great scripts. 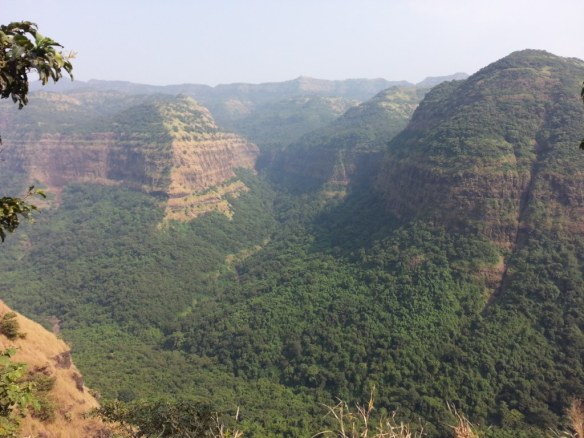 We started our journey from Pune and took the NH4 towards Satara and continued till the Bhor bypass. From here we took a right turn to the internal state highway is a single lane road and the condition is not very good in a few patches. However, all these minor peeves are washed away by the mere view of the Veer and the Bhatgar dam back waters. As we traveled the winding road, I was amazed to see various shades of green colour in the dam back waters in the valley below. It was a breathtaking sight to see 3 different shades of emerald green in the same water body. One of the patches of water was so still and calm, I wondered if it was the deepest part of the lake or if it had some other rock formation below it that resulted in zero ripples on the surface – truly a mesmerizing sight. 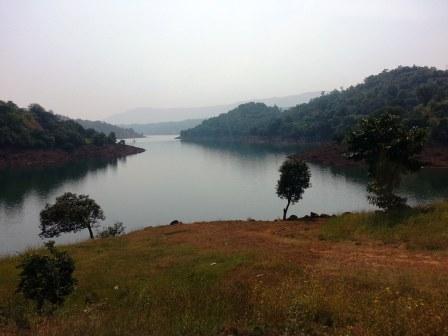 The green shades in the water

At a small pit stop to have chai and kanda bhaji just before the varandha ghat started, we confirmed the directions to Shivtharghal and were advised to finish the entire ghat and reach Varandh village and then take a right turn to reach the ghal or cave. At around 6 KM for this spot where we asked for the directions, there is a road which goes through dense forest and it does not allow more than one car at a time and is also very risky. Don’t take this road, go ahead for about 10 more KM and them you will see a board with directions to go to the ghal. Take this one.

We, being the non adventurous types when it comes to driving cars through the jungle; especially with kids on board decided to go the safe route. 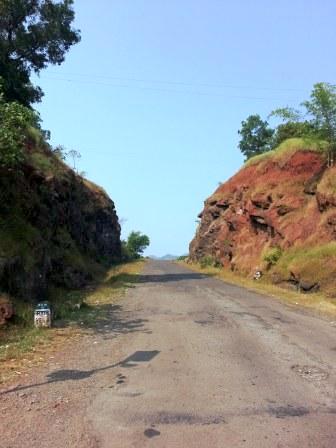 Even the internal road was a narrow one and our driver, obviously enjoying the winding turns and traffic free road, decided to ignore our requests to drive slowly, and took us to the ghal in no time without any incident at all. The blind turns must have given the race driver in him the high.

The road however was very picturesque and we were also expecting some wild animals to show themselves. (more on this later). The road ran parallel to a stream and we could hear the water gurgling and flowing even in a very dry summer and almost no rains in this season.

The road and the vehicle

The actual ghal, presented itself suddenly on one of the turns and we were glad to get down and finally start exploring this place – the one which we had heard and read about for a while now. Parking for cars is available in an open space under a few trees. Paying the driver to have his food while we went around and to wait for us to return, we began our walk.

On the left side just at the base of the temple structure are small hotels that serve everything from cold drinks to a proper lunch of pithla and bhakri. (Yes, everything is vegetarian here). It is suggested that you place your food order first and go to the temple so that by the time you return, a hot tasty meal is ready for you. We missed this and went straight to the temple.

The first thing that greets you is the sound of a perennial waterfall and a stream flowing on the right side of the approach road. Even in the dry monsoon, it was flowing with a force enough to make you hear it from a distance.

The entrance with the waterfall

We went ahead and proceeded towards the main cave (ghal). The friendly uncle gave us information about the daily routine and reminded us to take darshan and come back to the main hall for a ‘prasad’ which is a free meal for every visitor. I noticed a big hall which led to the path way to the cave. In the hall, information and boards showcasing the great teachings of Swami Ramdas are depicted in the form of big display banners and boards.

History goes that Swami Ramdas was a great supporter of Shivaji Maharaj and being a sadhu (sage) having many followers, he was able to collect and report important and critical information about enemy troop movements to Shivaji from time to time. When Afzal khan decided to attack Shivaji, Samartha Ramdas Swami used secret messages hidden in small sholks or letters. Shivaji, who knew the code, could decipher the message in the letter and was ready for the famous meeting between Afzal Khan and Shivaji Maharaj. 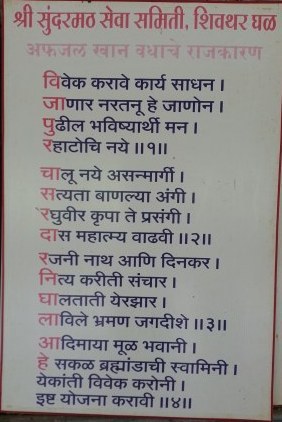 The actual cave is a big one and you can enter it easily without bending down or crouching. There are statues of Ramdas Swami and his disciple, Kalyan Swami who actually wrote the scripts as Samartha Ramdas dictated it to him in that cave. 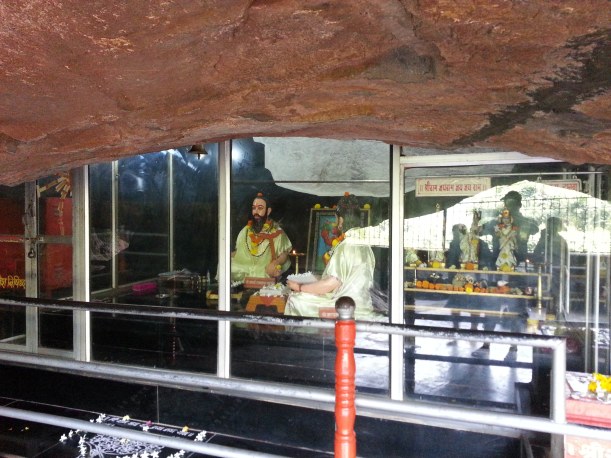 The cave where the script was written

Interestingly, the statues are also shown doing the same thing. Right next to this cave, is the waterfall that we could hear from the entrance. We had been warned of being careful of wild animals, especially snakes and we did see one big one encircled right on the entrance grill door. I managed to quickly go through, though I am totally terrified of these reptilessssss.

The Snake at the Gate

Entering the cave, gave me an instant feeling of calm and quietness, felt like I was more connected to my inner self. I wonder if it was really the significance of the place or just a psychological thing that I was experiencing, however it was a refreshing experience.

Memories of a long time back school picnic to this place also came up and I spent some time reflecting on those thoughts and the deep wisdom that these great people wrote for us so many years ago.

On coming back from the darshan, we headed for a dining hall where we were asked to pick our own plate, spoon and water vessel and were served two servings each of the ‘prasad’ – (moong dal khichadi) and there was also some pickle (kairi aachar) for added taste. A very good thing about this ‘prasad’ meal is that after you finish, you have to carry your plate to the washing area and clean it yourself.

Another thing that we had heard about this place involved the people who discovered this place and actually built the current temple and accommodation structure. Being related to one of them had generated a good amount of interest in this place. When we saw his name engraved in one of the stones there, it felt good. 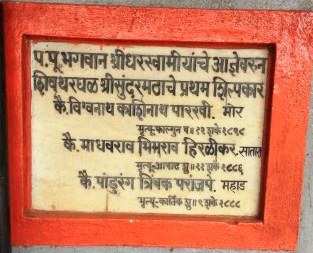 We also discussed about this with the management folks there and were understanding from them about the very harsh conditions in which Ramdas Swami lived here, and how wild animals roamed freely but never did any harm to Samarth Ramdas Swami or his disciples. While we were speaking, we heard a sudden noise and rustling of branches and a big thump on the metal sheet ceiling and realized that our friends had decided to drop by to see if they could get any food from the visitors.

Clicking a few pics, and visiting the Ganpati temple again we decided to descend the steps to see what was being served at the small hotels at the base. We enjoyed a wonderful lunch of pithla bhakri and butter milk and commenced our return journey to Pune.

The greenery around the temple

On our way back, before we reached the main road, we saw something silver flash past on the road and excitedly watched the tail of a long snake disappear to our left. It was a black one with a silver white belly. This was the first time I saw such a big snake and that too in the wild.

Our return journey through the Varandha ghat was a very picturesque one and we stopped at the top of the ghat where many other cars had also stopped. We were just awestruck to see the beauty of the Sahyadri mountains and its deep and green valleys. One tip – there are lots of monkeys here, and they have become bold enough to take food items from your hand if you lean out and offer it from the cars. I gave out cucumbers and apples which were whisked away in less than 3 seconds. We even saw around 4 -5 monkeys perched on the top of a parked car trying to get hold of what they saw inside. If by mistake the window would have been left open, the monkeys would have had a ball. 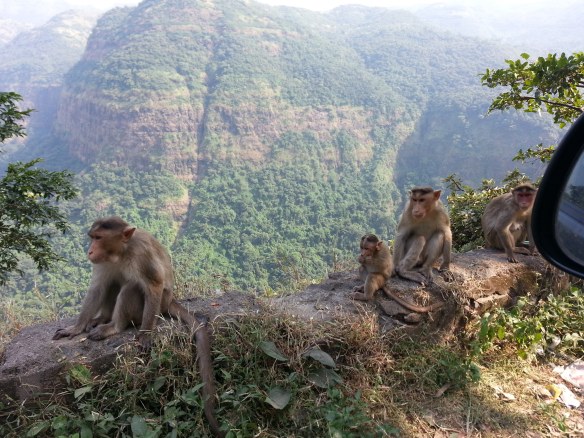 Enjoying this for a while, we began our return journey and reached home with memories and the satisfaction of a good darshan and blessings of Ramdas Swami.

Parking space: available near the temple

Must do things on the way: Visit Bhor Rajwada and Borehwar temple(Mahadev Temple)

Enjoy the picturesque back waters of the two dams.

7 thoughts on “Shivtharghal – A cave of wisdom”