Some places are synonymous to a city just like when we think of Paris, it is Eiffel Tower, for Agra it is the Taj Mahal, for New Delhi the Red fort and the Kutubminar, for Kolkata it is the Hawada bridge. Similarly for Pune it is Shaniwarwada and Sinhgad. Shaniwarwada was the pride of Punekars and a prominent part of Peshwa era, while the tale of Shivaji Maharaj would be incomplete without the mention of Kondhana i.e. Sinhgad and the great sacrifice of Tanaji Malusare, a lion heart soldier in Shivaji’s army. 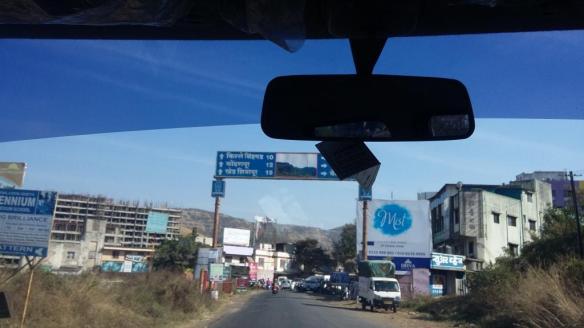 Situated at about 33 km from Pune city, Sinhgad fort stands tall telling the great war stories of Chatrapati Shivaji Maharaj and his brave soldiers (mavalas). From Donje, Sinhgad is located at about 10Km.

Located at 4,300 feet from sea-level Sinhgad is situated on Bhuleshwar mountain ranges of the Sahyadri. 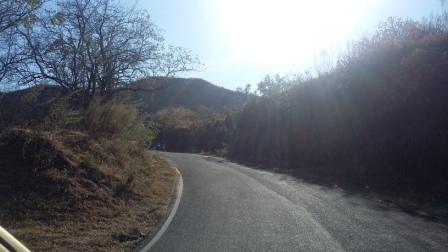 We have visited Sinhgad during Summer, Winter and late rainy season. Each trip was awesome with the beauty of that particular season. Each season has its own charm which captivates your mind. It could be a soft drizzle which envelopes sahyadri in green carpet, or the chilly winters during which the fog wraps the hills with a white jacket of clouds, or it could be the blossomed spring on the Sinhgad fort top which will give you a feel of paradise.

There are two ways to reach Sinhgad. You can go trekking (By the way Sinhgad is much sought after by every trekker that every trekker going on a trek outside Pune first does a rehearsal here.) Through trekking it would take about 45 minutes to reach the top.

By car you can reach the parking lot at the top via a road through mountains (ghat) in about 20 minutes. They charge Rs.50 per vehicle as a toll.

When the parking is full people park their cars near the parking area on the road. Please avoid doing that since the ghat road is very narrow and can cause heavy congestion. 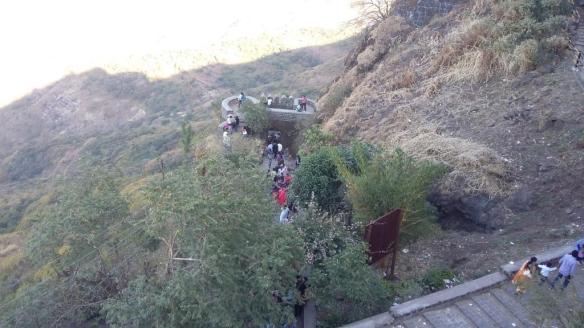 When you start your journey from parking area you see several food stalls to satisfy your taste buds. While trekking your way to the top many people take a break from the trek and enjoy the buttermilk, yogurt, boiled peanuts, raw mango etc. that is sold by vendors along the path. These vendors are usually villagers from around the fort and they bring their goods to sell to the trekkers.

You enter the fort through Pune Darwaja. A big and detailed map of Sinhgad fort is installed by the Maharashtra Government there. Do take a snap of this map as it helps us a lot for going around in the fort.

After entering through Pune Darwaja you get to see a board pointing in the right direction saying Tofkhana/ Daru kothar. It is a strongly built stone structure with ample open space. It was used to store the ammunition for cannons.

Going ahead on the left hand side a huge rock formation is seen. It was used to keep horses of the soldiers.

There is also a Shivsrushti exhibition on Shivaji Maharaj. It has pictures depicting important scenes of Shivaji Maharaj’s life crafted on copper plates. If you have good amount of time do visit it as it would deserve  sufficient time to understand it thoroughly.

Just ahead on few footsteps Lokamanya Tilak Niwas is there. It is believed that Mahatma Gandhi has also visited this place.

We headed up straight to Rajaram Maharaj Samadhi located at about half a km from here. He was the son of Shivaji Maharaj and Soyarabai.

There was also a small reservoir just behind the tomb. We were bit disturbed by seeing the condition of this reservoir as it was full of moss. These types of water tanks are found in all major forts and these need to be cleaned regularly and maintained properly as this might contain some important clues of history. There is a possibility of finding old coins, weapons and idols in these.

We went ahead till the Kalawantinicha buruj which gives us a great view of Tung, Tikona, Lohgad forts.

Donagiricha kada (cliff) is the one from where Tanaji Malusare climbed on the fort to start the beginning of a fierce battle that ended in Shivaji’s army winning the fort.

About Tanaji Malusare: In the Purander fort treaty, Kondhana (Sinhgad fort) was lost to  the Mughals along with many other forts. Jijabai used to look at Kondhana from her Rajgad fort and it was causing tremendous pain to her that this fort was with the Mughals (enemies). She expressed her desire to take back this fort from the enemies hands. While she was discussing this with Shivaji Maharaj, Tanaji Malusare, Shivaji’s childhood friend visited them to give the  invitation of his son’s wedding. When he came to know about this plan he took the leadership of this campaign and on 4th Feb 1670 at night climbed this fort along with his soldiers from a very dangerous cliff.It is also said that Tanaji Malusare used a monitor lizard (a pet lizard called Yashwanti to climb this cliff, he tied a rope to the lizard’s tail which helped the climbing) Tanaji and his soldiers climbed the fort in total darkness(moonless night). A fierce battle took place and Tanaji Malusare was killed by Udyabhan just before capturing the fort.

All the soldiers got disturbed by the fall of their leader and started to retreat. Just then Tanaji’s brother Suryaji Malusare and Shelarmama((an old soldier in his mid seventies) took the charge of the campaign and asked the soldiers to come back, by reminding them about the oath of Swarajya. Shelarmama cut the ropes leaving no choice for them but to fight. In the battle that followed, Suryaji and Shelarmama killed Udyabhan (who was in charge of the fort) thus capturing the fort.’Gad ala pan Sinha gela’ (The fort is won but a lion is lost) a phrase uttered by Shivaji Maharaj in respect to the fallen warrior became popular after this great sacrifice of Tanaji as the Marathas lost a true and courageous lion from their army.

Food and refreshments on the Fort

One can enjoy the traditional marathi dish Zunka Bhakar with onion pakodas (which is a must with extremely spicy chutney, made from oil, onions and lots of red chilly powder). Do try butermilk, or curd given in earthen pot.There are fixed rates for food items and are displayed at the entrance. 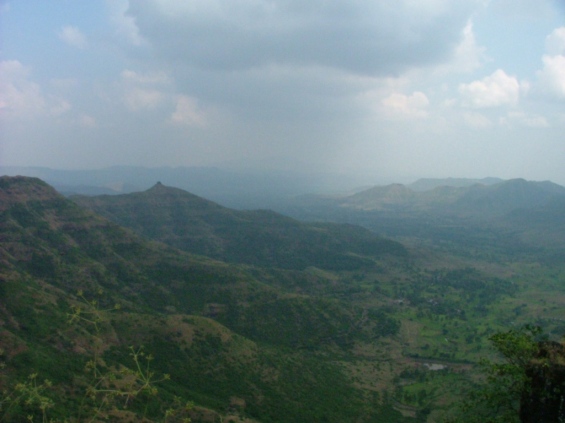 PMPML buses run every hour from Shaniwarwada and Swargate up to the base of the fort. From the base you can get into a shared vehicle like a jeep, tempo etc. as well. If you have your own vehicle that would be the best option.

Trekking/ climbing during the rainy season should be done with proper precautions as the routes become slippery. Of late Govt. had closed access to Sinhgad due to heavy rain as there was a possibility of land slide. There was also an alternative way provided for some time which was extremely narrow and full of ditches and potholes. Better check with the latest news before visiting this place to avoid mood off. 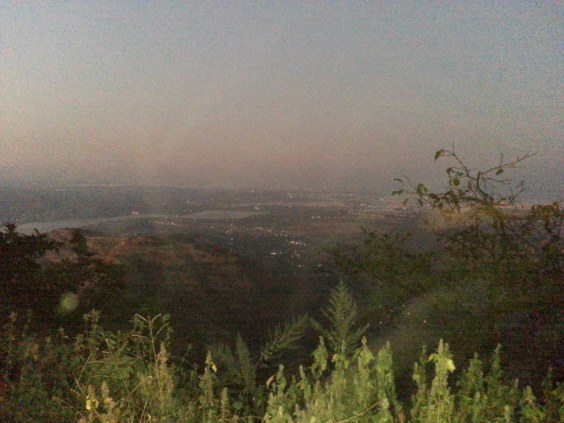 To avoid overcrowding during holidays Government can start online registration and toll collection, thus limiting the number of tourists to this wonderful fort to a manageable level. That will make a one day picnic to Sinhgad more pleasurable and memorable.

Location: Near Donje village in Pune

Do taste the delicious Zunka bhakar on the top of the fort and do not throw empty water bottles and other garbage there ( It is a tragedy that this has to be told that too again and again) Use the dustbins instead which Government has kept at every half km.

5 thoughts on “Fort Sinhgad: Soul of Jijabai and Shivaji Maharaj”