Situated at about 27 km from Pune, on the Pune Nagar highway, Tulapur tells the great story of valour and sacrifice of second chatrapati of Marathas Sambhaji Maharaj, son of Great Maratha King Chatrapati Shivaji Maharaj.

From the main Nagar road highway we need to take a left turn at Lonikand. After taking a left turn you would see the electric receiving station of Lonikand. Keep following the same road. You would see few companies and hotels on the way. After about five kilometers from the highway you would see a board pointing in the right direction saying Samadhi of Sambhaji Maharaj.

Though the inner road leading to Samadhi is very narrow (at a time only a single four wheeler can enter) there is ample space for parking two wheelers and four wheelers inside. The entrance gate is beautifully made. 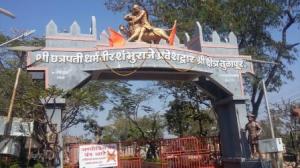 On entering the premises you are greeted by a book stall. It has most of the books about forts, Shivaji Maharaj and his great soldiers and about many other great leaders.

There is a big statue of Sambhaji Maharaj and on our recent visit we saw the compound work around this statue was in progress. 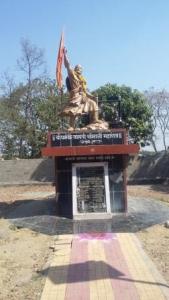 I remember visiting this place 15 years ago. There was hardly anyone at this place that time. Today a good number of people visit it. There is a beautiful Shiva temple Sangameshwar made up of stone.The name is given since there is confluence of three rivers Bhama, Bhima and Indrayani. The temple has a spacious courtyard and it is very clean. Inside one can see idols of Vitthal Rukhmini and Ganesh which is made up of single stone and dates back to 1633. 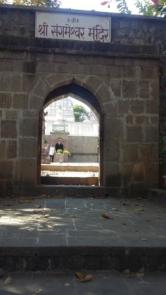 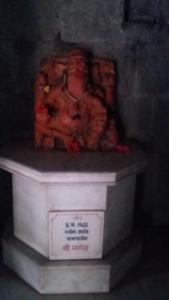 The Shivaling is present in the inner sanctum. The entrance arch of inner sanctum is magnificently carved with typical garland designs and triangles at the base.

The surroundings of this temple are kept clean. When we came out of the temple we saw few vegetable hawkers selling fresh vegetables from their farms at reasonable pricing. 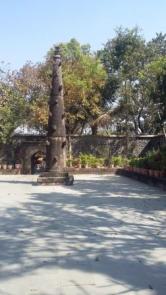 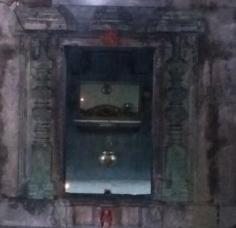 Near the temple is the Tomb of Kavi Kalash. He was brutally tortured and killed at this place. He was the real friend of Sambhaji Maharaj who was with him till the end. Even after the brutal torture he did not stop praising Sambhaji Maharaj, Aurangzeb had his throat cut. 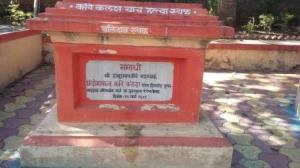 On the other side of temple is the Samadhi of Sambhaji Raje. Inside the room is a half statue of Sambhaji Maharaj. It is kept clean and worshipped daily. Around this statue few paintings related to Tulapur history are shown. There is also a picture of Sambhaji Maharaj which was obtained from the British Library in London. 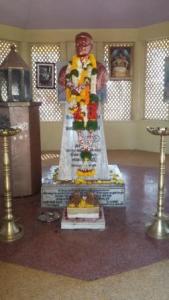 There is a small canteen near the Samadhi were one can have snacks. There is also a boat ride facility available.

I have a sincere request to all the visitors to maintain the sanctity of this place and not making this place a picnic spot for entertainment.

Sambhaji Maharaj was brutally tortured and killed by Aurangzeb. He was asked to surrender his forts, treasures and names of Mughal collaborators who helped Marathas. But he stood tall, faced all torture and refused to convert to Islam and help Aurangzeb in any way. 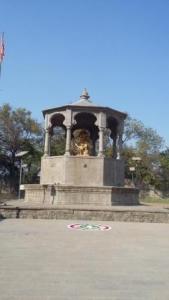 On the other side of the river bank, is the village called Vadhu. To reach there you will again have to come back to the highway and take a left turn, go for about 2 kms and take a left turn again when you see the board Shikrapur Police chowky. After going inside for about 3 km you will also see a board saying Chatrapati Sambhaji Maharaj Samadhi. Go straight inside it you will reach Maharani Yesubai entrance gate. 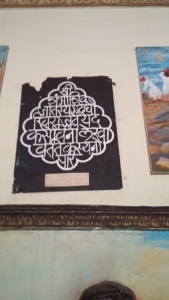 Sambhaji Maharaj was great scholar of Brij and Sanskrit language.He was valiant king who stood in front of huge army of 5 lakh mughal soldiers of Aurangzeb with his own smaller army. He fought bravely with Aurangzeb for 8 years and never lost any important fort or any ship. He was the first king who tried to build a bridge in sea in order to capture invincible Janjira. He sacrificed his life at the age of 32 for the protection of his religion and his countrymen.

Great Salute to this Maratha King!