We are always in a hurry to reach some destination. As our entire goal is to reach that destination at the earliest, we always (well most of the time) miss the important milestones which are on the way. I have passed by this particular road in Sadashiv Peth at least 1000 times during the past so many years but never got a chance to visit this  Laxmi Nrusinh Temple. This time, I planned it explicitly to visit this temple during the break of a sports event.

Shree Laxmi Nrusinh Mandir is located just opposite to Pune Vidyarthi Gruha. It is a two-storied structure with wooden pillars typical to Peshwa Era architecture. From outside one can notice the balcony with a railing supported by balusters and beautifully carved arches.

Though situated on a busy road a single step inside the temple changes the entire atmosphere. Suddenly the hustle and bustle of the busy road fade away and a calm soothing feeling grips your mind. 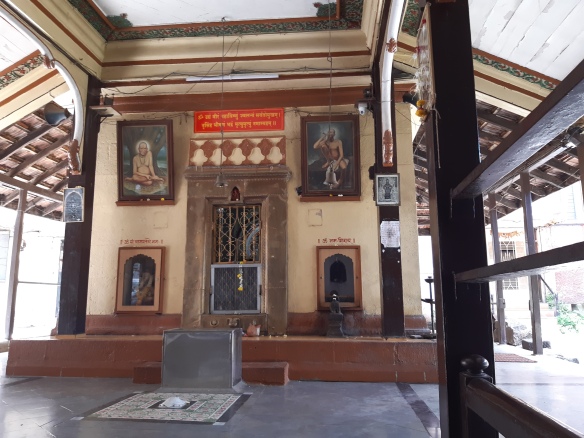 This temple is dedicated to Nrusinh or Narsinha which is considered as the fourth incarnation of Lord Vishnu. There are very few temples of Lord Narshinh.

History of the temple: This temple was built in 1774. This idol has been brought from Kashi 250 years ago. A very learned brahmin who was an expert in ‘Vedic Literature’, Ganeshbhat Joshi installed this idol on Ashadh Shudha Dashmi Shake 1696 that is in the year 1774. One can see the exact date written on the exterior pillar of the temple. 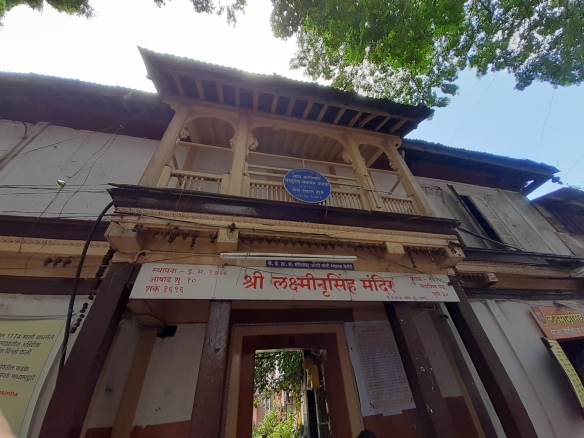 The story goes like this. Mr.Joshi had come to Pune from Sangmeshwar taluka of Ratnagiri district in search of work. Shree Narsinh was his family deity. He had no idol of Narsinh to worship in Pune and this made him very sad. One day he had a vision that Lord Narsinh is in a cactus bush at Kashi. He went to Kashi with his wife. Though the journey was tedious, he really got this beautiful white marble idol there. He installed this idol in Pune and constructed a small beautiful temple. It is said that Peshwa had shown interest in constructing this temple and offering him the right to worship but he insisted that God has come to him so he needs to take care of God.  He constructed a beautiful temple out of which old entrance gate, wooden hall and original sanctum sanctorum can be seen even now. Wooden hall is decorated with intricately carved wooden columns and various frames of different gods are put on the columns. When I visited the temple I  saw a few students studying in this peaceful atmosphere which was a very pleasant sight. The Sanctum sanctorum contains the white marble idol of Narsinh which is shown seated in the lotus position. It is four-handed and supporting goddess Laxmi with one hand sitting in his lap. A carved arch is seen behind the idol with a silver snake covering the idol with its hood.

Currently, the tenth generation is looking after the temple management. Though the temple is private, it is open for devotees.

A short video to give you an inside peek of this temple.

Lord Narsinh: 4th Incarnation of Vishnu: As per Padma Puran on the 14th day of Shuklapaksha of the Vaishakh month of Hindu calendar, Bhagwan Narsinh appeared. He was having half-human and half-lion form, thus the name Narsinh. As per the Puranas, Bhakta Prahlad was a great devotee of Lord Vishnu. His father, demon Hiranyakashyapu considered himself superior to even Gods and had become unruly and boastful. He had received a blessing that he cannot be killed by a human or bird or animal, he cannot be killed with water or wind or with any weapon, he could not be killed during the day or the night neither at home nor outside. Due to this blessing, he had become boastful and was committing atrocities against his subjects. He did not spare even his own son and started torturing him for worshipping Lord Vishnu. To destroy this demon and stop the suffering Lord Narsinh came to his rescue. He appeared from a column at the twilight in half human and half lion form and killed Hiranyakashyapu on his lap, exactly at the door with his nails. Thus Hiranyakashyapu was not able to get any benefit of his blessing and the Lord saved his ardent devotee Pralhad.

To calm the fierce form of  Narsinh, Sandalwood is applied to these idols, and also water and food donations take place at various temples of Narsinh across India.

The main place of Lord Narsinh is considered in the Prahladpura temple in Multan of present-day Pakistan. Based on Bhakta Prahlad, the name of the place is called Prahladpura and it is believed that Nrusinh killed Hiranyakashyapu at this place.   Mr.Anant Joshi from the current generation had visited this place a brought some soil and brick from this place as a souvenir of this sacred place.

Interesting facts related to this temple.

Freedom fighter Vasudev Balwant Phadke used to stay here. It is said that in this time he had kept his sword in front of Swami Samarth of Akkalkot to get his blessings. As per the records, Shreedharswami and Balgandharv have also visited this place.

It is feared that this historical temple might be lost due to the road widening project so currently there is a movement going on to stop this. 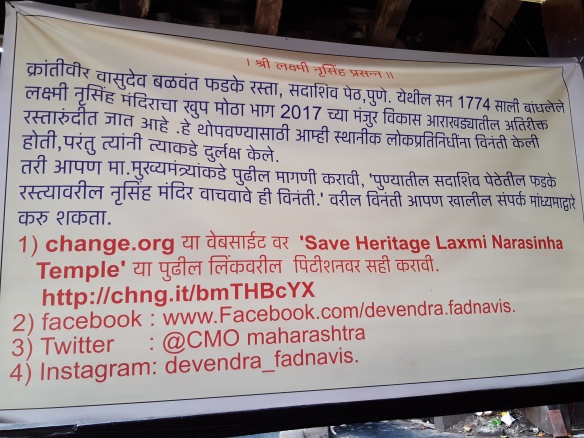 Hope this temple which an important part of our heritage stays safe and sound and future generations would be able to see it.

*The best way to reach this place is to catch a bus and get down at S.P.College. The temple is within a walking distance from this place.