The Ganesh Festival has always held a special place in every Punekar’s heart. Though celebrated all across India and in some parts of the world, the Pune Ganesh Festival holds its own charm right from its beginning over a century ago.

The city of Pune, where Lokamanya Tilak started the Ganeshotsav in 1893, celebrates this festival with same vigour and energy even after 125 years.

5 Manache Ganapati: Let us have detailed look at the 5 Ganapati mandals or groups which get the honour of leading the Ganapati procession.

In 1893 when Lokamanya Tilak started  the Ganesh Festival for common people, there were only 3 groups (Mandals) taking part in the procession. The following year this increased to a large number of around 100 Mandals or groups. 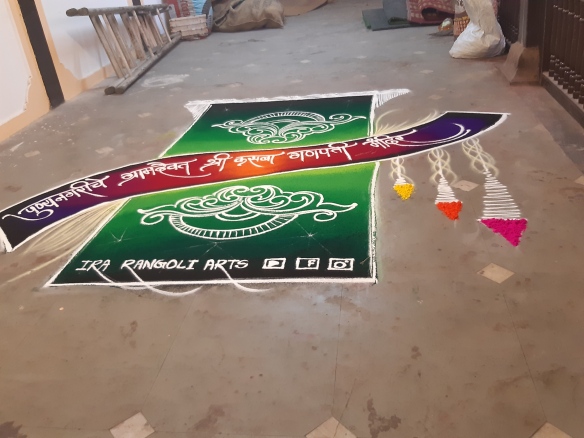 Kasba Ganapati obtained an important stature in the history of Pune around 400 years ago.  When Jijabai came to Pune, she was notified of a Ganapati idol in a rough-cut form (not having any specific shape or size), which was found during ploughing a field. She decided to install it and build a temple around the same. One of the 8 families which came to Pune with Jijabai was the Thakar family. They were made the care takers of the temple. Today 16th generation of the same family looks after the Kasba Ganapati temple.

As per the information board near the entrance of  the temple, the temple construction took place around 1626AD.

The temple seems to be having two clear distinct parts, the main hall and the sanctum sanctorum. If one observes carefully, it is noticed that the temple is built on the ruins of some earlier temple of a different era.

During a recently held heritage walk, Mr. Anurag Vaidya of ‘FirastiMaharashtrachi’ pointed out this clear distinction in the building structure between the main hall and the sanctum sanctorum.

The temple contains a wooden hall (sabhamandap) decorated with beautiful columns and houses a gallery on the upper floor. This structure typically outlines the style of the Peshwa era.

The sanctum sanctorum is made in stone. On the pradakshina marg, one can see the typical lotus petal designs at the base which was a prominent design style for temples during reign of the Yadava rulers (around 12th or 13th century).

The Ganapati idol in this temple is now decorated with diamonds in its eyes and a ruby (Manik) in its navel. Whenever there is a marriage, thread ceremony or any other auspicious occasion in Pune households, the first invitation is given to Kasba Ganapati and prayers are offered to Lord Ganesh to help accomplish the rituals and tasks without any difficulties. 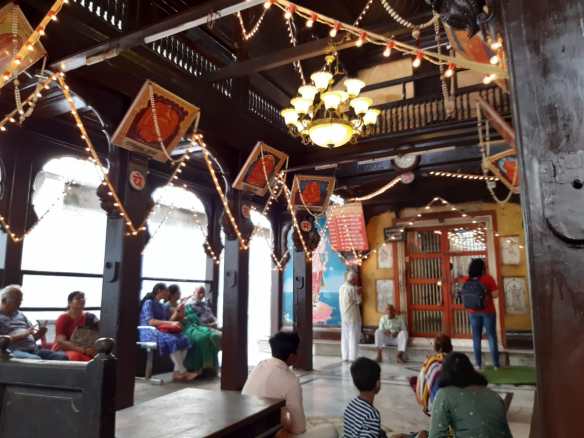 The temple is closed from 12 noon to 4 pm. During the Ganesh Festival a huge pandal is erected in front of the main temple and a small Ganesh idol is brought in a palanquin with a grand procession. Accompanied by the playing of Dhol and Tashas, the idol is installed in this pandal with proper rituals. People flock to this place to see this idol and visit the main temple and to seek blessings. The main temple is also decorated with lights, rangolis and offers a majestic view. It is maintained by the Thakar family (considered to be 16th generation of Thakars) who were one of the 8 families which came to Pune along with Jijbai and young Shivaji. 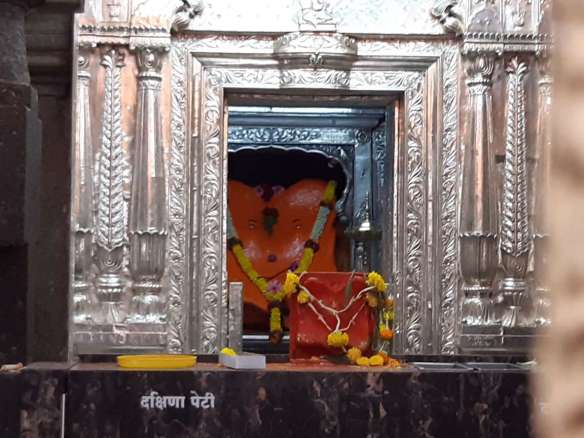 It is also recommended to visit this temple on other days than the Ganesh festival days as one gets to sit quietly inside the temple and experience and observe the idol and study the temple structure in a peaceful manner.

This gets its second rank as the Tambadi Jogeshwari goddess is regarded as the deity of the town.

This temple is one of the oldest temples built in the city around the year 1545 by Triyambak Bendre.

Guruji Talim is situated on Laxmi road. This Mandal gets a good support from shop owners and cloth merchants located nearby.

This mandal was started by Nanasaheb Kasgiwale, Bhiku Shinde, Shaikh Lalabhai, and Vastad Nalband in 1887 and was backed by a training centre for wrestlers called as Guruji Talim.

During the Hindu Muslim riots of 1893 this mandal played an important role in spreading the communal harmony. Hence this mandal was given the honour of the third place by Lokamanya Tilak in the procession.

Tulshibaug Ganpati Mandal was started in 1901. The large idol which we see today is  the 15 feet fibreglass idol. It  was made in 1975 by D.S. Khatavkar. This Ganapati is considered as the 4th Manacha Ganapati. It is installed in the famous shoppers paradise of Pune ‘Tulshibaug’.

Earlier, this Ganesh mandal festival was celebrated in the Vinchurkar wada and from 1902 it was shifted to Kesariwada (Gaikwad wada).

Many cultural events are conducted during the Ganesh festival at Kesariwada. This Ganapati is given the fifth place in the world famous Ganpati immersion procession of Pune city.

Pune,  the cultural capital of Maharashtra is visited by many people to witness this grand 10 day celebration of Ganesh Festival. Lord Ganesha is indeed the most revered and loved Hindu God. A source of lots of energy, happiness, joy and satisfaction.The God of all arts, the remover of all obstacles may bless everyone and let each one of us find the true happiness.

Do watch a detailed video about these five Ganesha on