Situated on the Senapati Bapat road in Pune, Babasaheb Ambedkar memorial and museum does catch your sight due to its dome shaped structure partially hidden in the lush green trees. I was a bit hesitant earlier to visit this place as I was under the impression that it is not open to public, it is only for VVIPs or some special visits of ministers or it is only for symbiosis society etc. But what a fool I was. It was the museum of a social reformer, the person who fought for equal rights for all human beings. 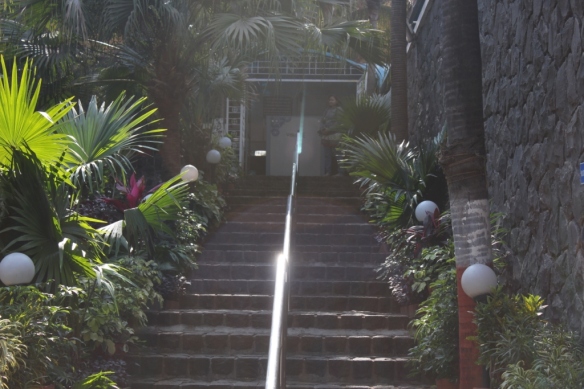 Just diagonally opposite to the Balbharati building this memorial and museum of Dr. Babasaheb Ambedkar is located. Dr. Bhimrao Ramji Ambedkar was a great scholar, writer, a powerful speaker, an economist and above all the father of Indian Constitution.

Dr.B. R. Ambedkar was born to Bhimabai and Ramji on 14 April 1891 in Mhow Army Cantonment. His father Subhedar Ramji Sankpal retired from army in 1894 and shifted to Satara. After spending few years in Satara,  they shifted to Mumbai for better education of Children. Dr. Ambedkar passed matriculation in 1907. He was the first untouchable to pass matriculation. He completed his B.A from Elphinstone college, Bombay. He went to Columbia University, USA to study M.A. Economics by using his scholarship funds provided by the King of Baroda, Sayajirao Gaikwad. Along with M.A. Economics, he was also awarded doctorate in Philosophy in 1916. He went to London to complete M.S. and Bar at Law. After returning to India he worked against caste discrimination.

In this museum, through a beautiful display of photos and information, life story of Dr. Ambedkar is presented in neatly manner.

No one can ever forget his famous satyagraha at Chavadar Tale (Lake). Babasaheb Ambedkar stated that a life-giving commodity like water cannot be a privilege of select class. No one can deny it to others. Dr. Ambedkar formed Samta Samaj Sangha on 4th September 1920. On 19th March 1927 Dr. Ambedkar with his other associates like Anandrao Chitre, Shri Bapu Sahastrabudhe, Shri Gaikwad, Shri More etc. gathered on the banks of Chavadar lake and drank a handlful of water from the lake. There is a picture and information about this incidence displayed in the museum. 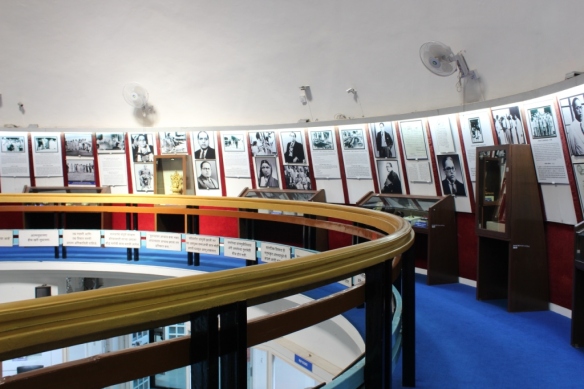 His personal belongings have been very well preserved and displayed. One would get to see his clothes, old suit cases, his bed, his table and chair where he wrote constitution of India, his utensils, dinning table, his collection of books, a silver-ink pot which was gifted by Lord Mount batten (Governor of India before freedom). 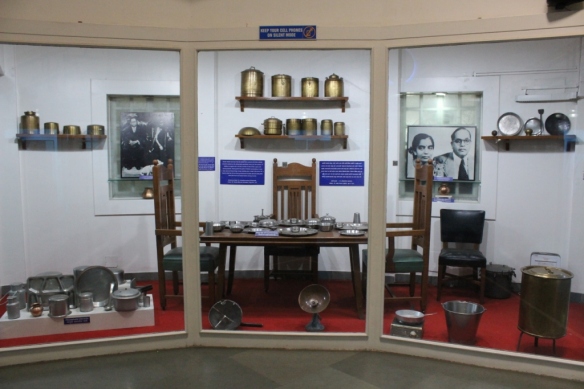 There is also a statue of Gautam Buddha where he bowed each day, India’s highest civil award Bharat Ratna which was given posthumously to Dr. Babasaheb Ambedkar. 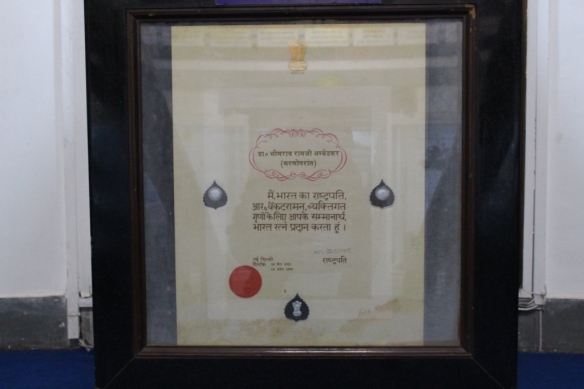 Even Dr. Ambedkar’s study room has been replicated With his statue sitting at the writing table. 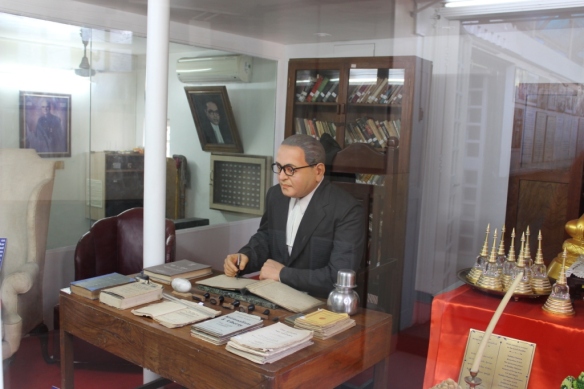 Dr. Ambedkar had purchased violin in Delhi and Sathe brothers from Mumbai used to come there to teach him violin.

Outside the museum many trees are planted by famous politicians. One of the trees is a direct descendant of the Bodhi tree under which Gautam Buddha attained enlightenment. It is planted by Maisaheb Ambedkar.

There is also an open air theater where various programs take place. The surroundings of the museum are soothing and calm.

This museum is adjacent to Hanuman tekadi and they have made a small open air study with benches and desks. There were so many youngsters sitting there and studying peacefully. It was a rare sight to have so many youngsters around but no noise at all.:-)

Dr. Ambedkar  was exponent of Dhamma Chakra. He was very much concerned about the upliftment of untouchables. He also guided them on the path of progress and development.

Do plan your visit and get to know more details about this architect of India’s constitution. It would be a small tour in the important era of India’s history. I would recommend all the parents to take their kids to this place. It is easier to learn history by looking at the various artifacts, seeing the photos and reading the details than just reading it and mugging it up from the history text book. Not just history but other subjects especially science would be understood better when you feel it, do it yourself then you understand it in better manner. So, do visit this museum and enjoy the feeling of tracking through some pages of history. 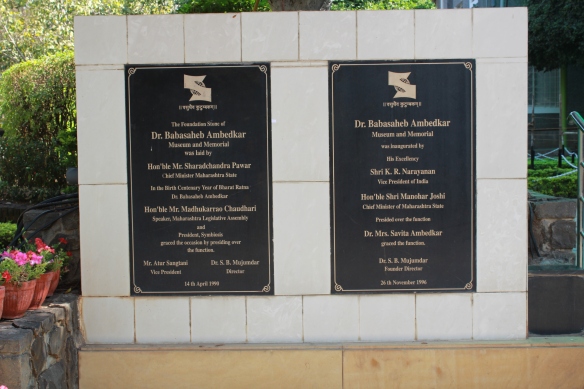 It is important to note that such figures such as Dr. Babasaheb Ambedkar are national or even international figures. So it is not right to associate them with any particular caste or religion. They are the true inspirations of all individuals.

Quick notes:
Easy to reach by bus, auto or own vehicle,
Parking space is available inside the museum main gate
Photography is allowed with additional charge of rs.50
Timings 8:30 AM to 5:30 PM

If the management could do a Small audio visual documentary,  it would give a good idea of his work and would generate more interest in people to see the things with a keen eye.